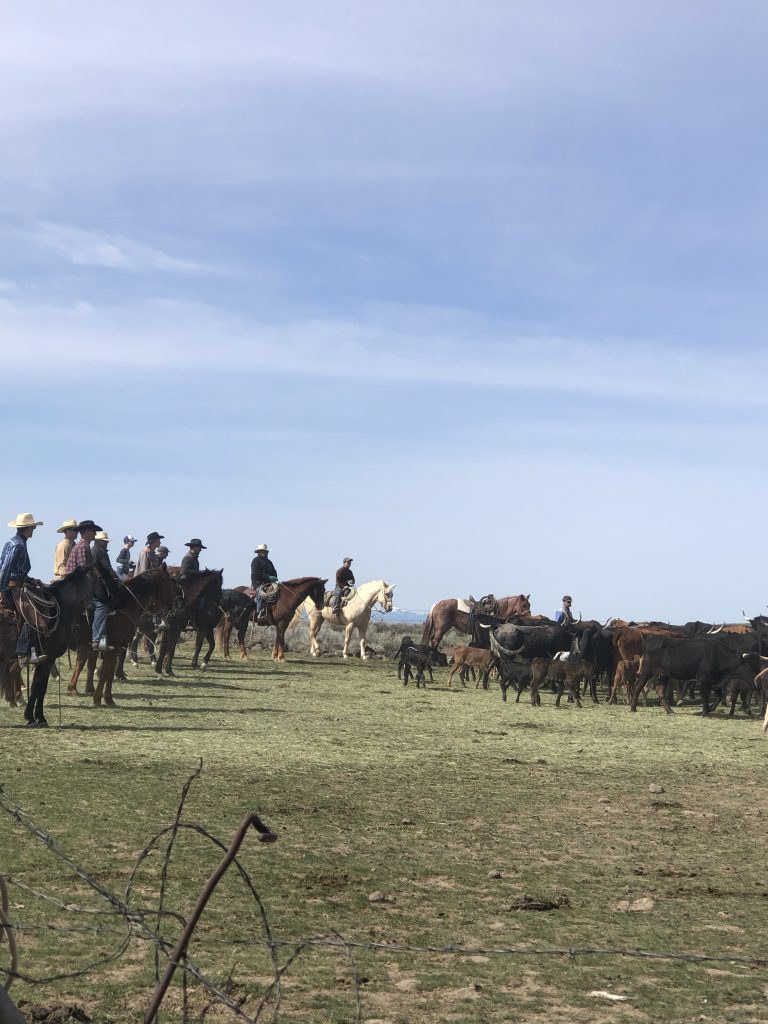 Starting the end of March each spring, here in Southwest Idaho, on into May and occasionally June we rope and drag calves to a branding fire. We includes myself, 3 of my sons, a daughter and now some grandsons. One branding that we attend is referred to as the 3rd generation Hoffman/Spaulding branding.

Originally it was Ted Hoffman, a good friend and local vet, myself and our kids. The kids were pretty young at first but were soon riding and roping and not content to just work the ground.

Swing a loop! Yes you heard me, we rope em here in Southwest Idaho and a branding table is a cuss word most places. There’s a few folks still using them but they are few and far between around here. I come close to losing the tip of the small finger on my left hand to a branding table in Montana over forty years ago so you can only imagine my opinion of them; actually don’t ask as I would rather not use that language on my blog.

Kole and I looking for our next target; riding horses we have bred and raised, Ezzie under me and Kole a straddle Cinco. Cinco was born May 5th so Cinco seemed to be a fitting name; the little bugger can work for a living but he’s got a naughty side to him. 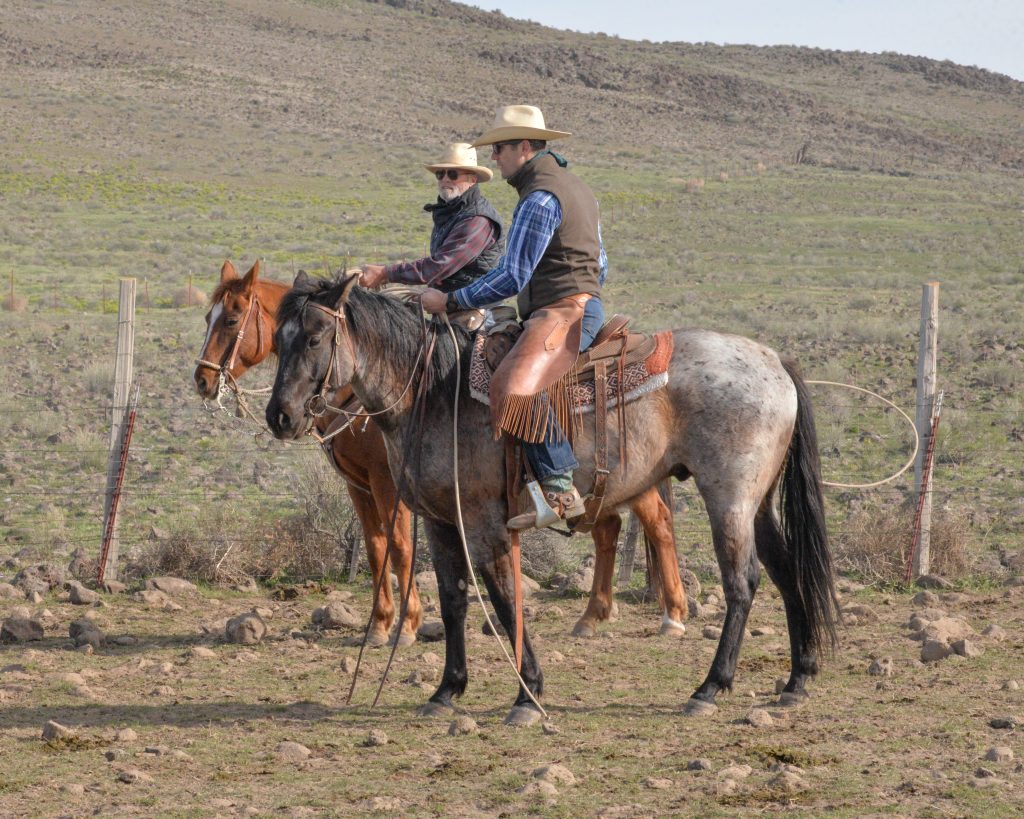 Roping both ends is my favorite way to get them to the fire, ‘them’ of course are calves. Small and new born or 2 months old and rowdy its the best way to get them to the fire. Ropers that are rough on cattle, horses and crew usually don’t get invited back. Although  I have seen some pretty unwarranted things at a branding and no one said a word. Like the time a world famous Cowboy clinician and a client stretched a 35 pound Corriente calf chest high; I suppose it depends on who you are as to whether you get chewed out or lose your invitation.

Ezzie and I with a frisky one necked, looking to fit in heading to the fire. I’m riding her in the traditional double rein. It’s not required on her as she is straight up in the bridle, I just prefer it for a lot of my riding. She’s sensitive enough that a halter would do but the balance that a Spanish Spade with Santa Barbara check pieces puts on a horses face is unmatched. All of my horses pack it at one time or another. 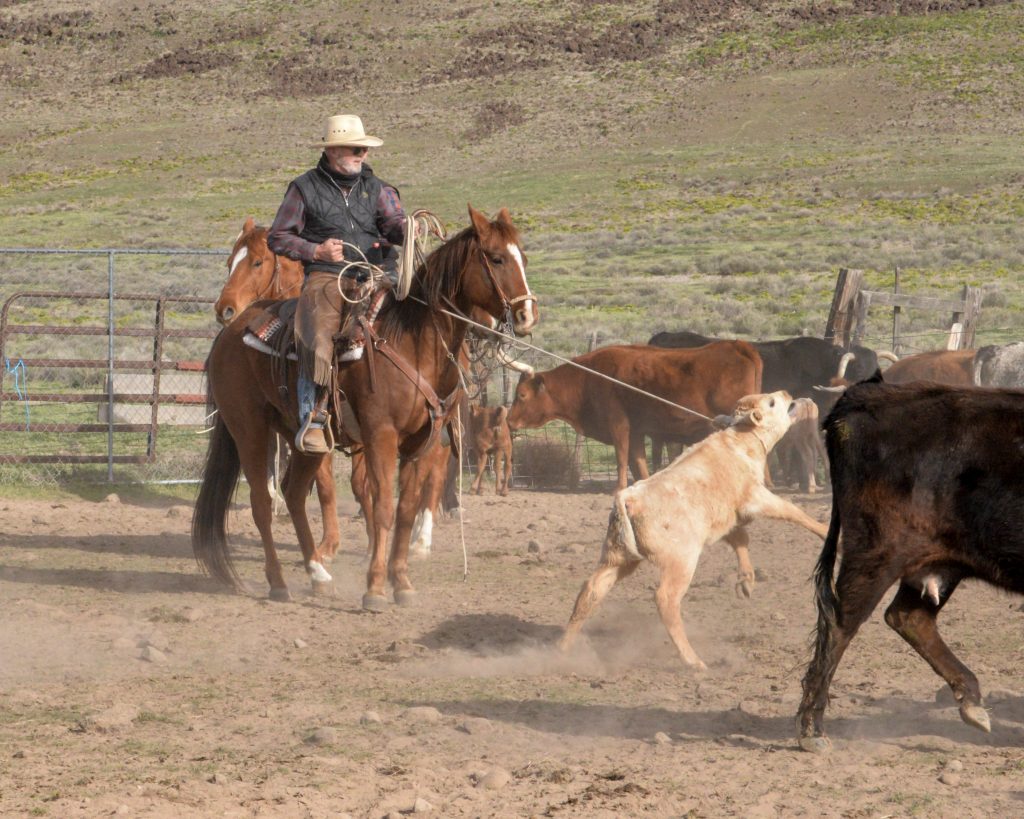 I have seen ropers get off of their horse and pick a small calf up and carry it to the fire for branding, tagging, shots and castration if it is a bull calf rather than have a rope on each end and roughing up an undersized calf. A dead calf brings the rancher no income so how you handle yourself, your horse, your rope and his or her cattle is important.

Being able to rope is not all that is required to be invited to a branding in this area and maintain that invitation, horsemanship and roping etiquette is a must as well. That invitation can be hard earned and easily lost. One of the best ways to lose an invitation is to invite someone along without clearing it with the cattle owner. Several years ago while helping Ted brand calves at the Dillingham place out of Glenns Ferry, a friend of mine who had an invitation brought a couple along unannounced. I mentioned it to him that it was poor etiquette and he replied that he’d never been to a branding that there was too much help; that wasn’t the point. He lost his invitation to come back.

One of my least favorite ways to brand is to heel only and drag them to the fire and secure them with a head lock, refereed to ‘Norforks’ in this country. I don’t know if I spelled that correctly and don’t care enough to find out as I am not a fan of them. The one place that we brand that uses them my daughter ropes with me and and I keep telling her to toss them damn things in the river; she hasn’t yet but I keep hoping. 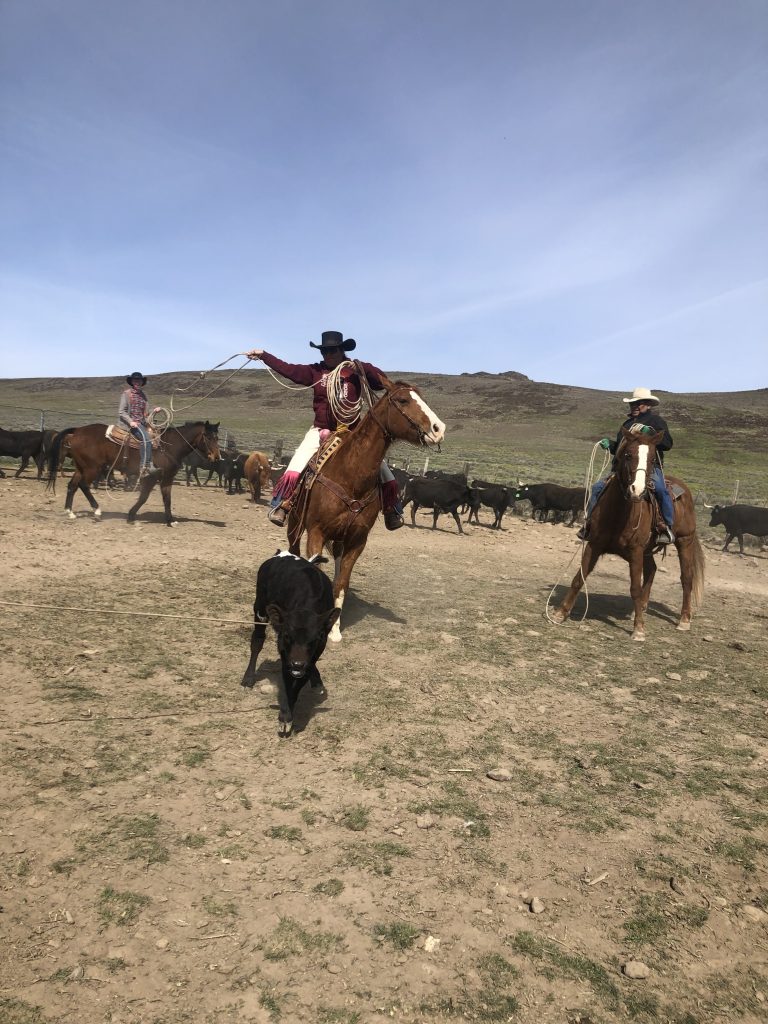 Victoria and her dad Al along with my grandson Harrison; I believe Al turned 80 this year

This spring our 2 youngest sons flew home and roped at the Hoffman/Spaulding 3rd generation branding. I invited Victoria Jackson to come and do a photo shoot as it was her style of branding. She asked if she could bring her dad and I said by all means. They brought their saddles and we put them on a couple of our horses and from all appearances they had a great time. Victoria captured the action on film and made us look better that we are, or at least as good as we can ever be. Anyone familiar with Victoria’s work knows that she has a great eye with her camera; near as I can tell she took over 700 pictures that day. Some of our Mennonite friends were roping with us that day as well and although they would rather not pose for a photo they weren’t offended by the action shots; they don’t need any help looking good at riding and roping as they are all top hands and we are always glad to share a branding pen with them.

Scott picking up the hind legs. 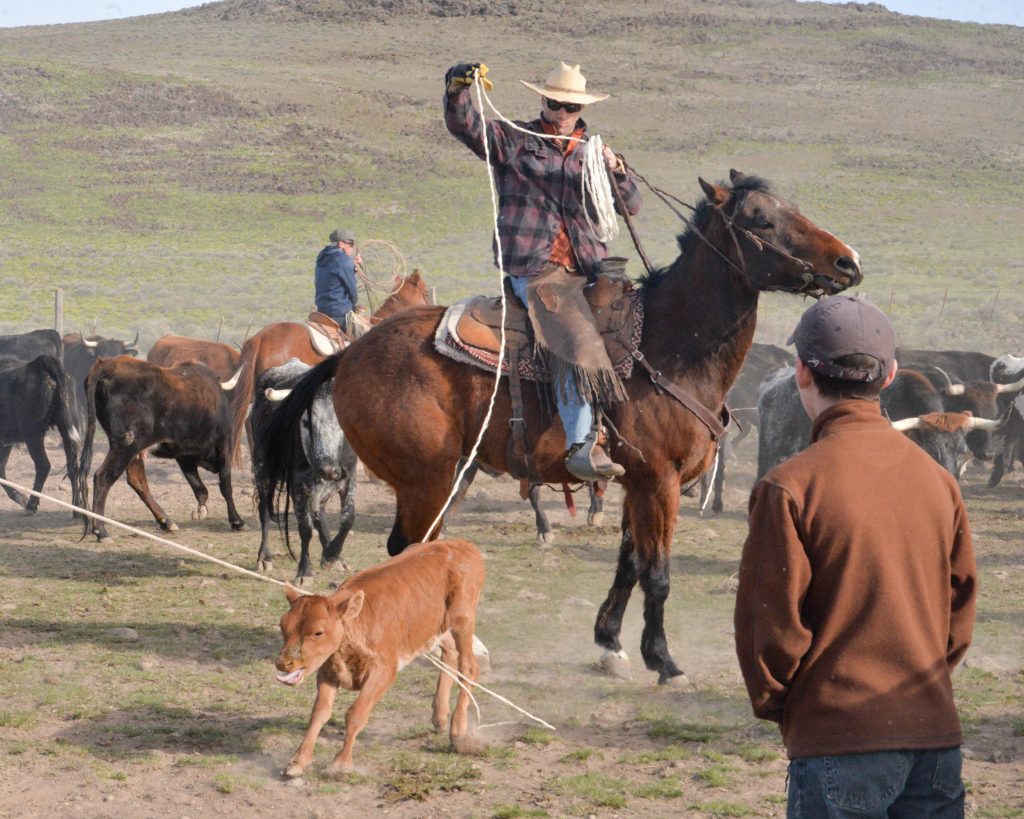 Kamron with one necked, Kole moving in for a heel shot, me looking on and ready to back Kole up and Scott working the ground. A bad day of branding beats a good day at work anytime, and when you can rope with 3 of your sons it makes it even better. Kole is riding our roan colt Cinco and Kamron is on Red; they are 5 this year and 3/4 brothers and coming along good but they are the kind that need a job. I’m riding Ezzie  which is Red’s mom, Cinco is out of a half sister to Ezzie; same sire different mares. We are riding 3rd and 4th generation horses that we have bred and raised. 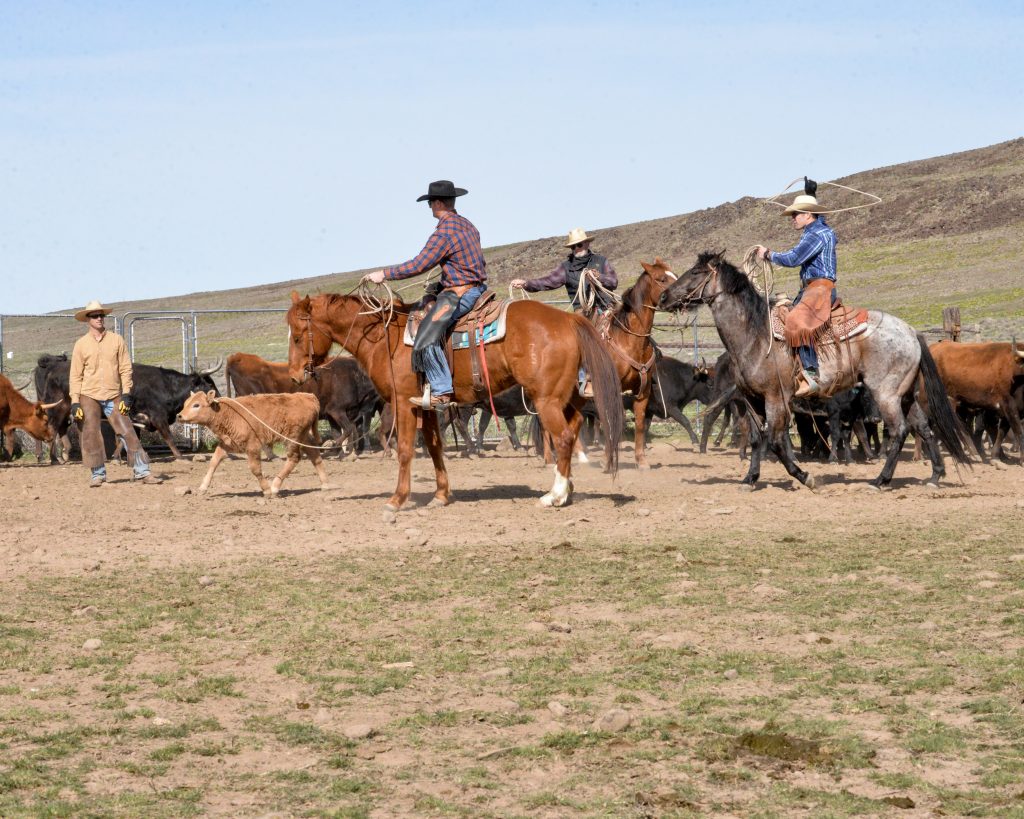 Our 2 youngest sons, Kole and Kamron, were pretty young when Ted and I first started roping together. They had a Palomino Shetland pony that they rode everywhere and we had a half sized horse out of ‘Trigger’, the Shetland  and a Quarter horse mare that they learned to rope off of. When they were about 14 and 10 respectively they headed and heeled the last calf at our family branding; no doubt I was a proud dad. Both of them, in their teen age years, made a few trips to Independence California to rope with John Lacey and crew; experience and starting young makes good ropers.

Going back to Ted, it has been a few years but Ted and I use to do some one on one brandings. Where it was just the two of use we would use a dead man and whoever was catching stayed on his horse and held the calves hind legs tight as the dead man held his front legs. I preferred the dead man to the Norforks as it secured the calves legs and not his neck.

The Hoffman/Spaulding branding has evolved from Ted and our kids to his 2 girls Kate and Sarah and their husbands Jeremy and Chris as well as their kids; that’s the 3rd generation along with my grand-kids.

Nice shot of our backsides but Scott and I are trying to show Lina, Max and Bear how to switch the head rope to the front legs. 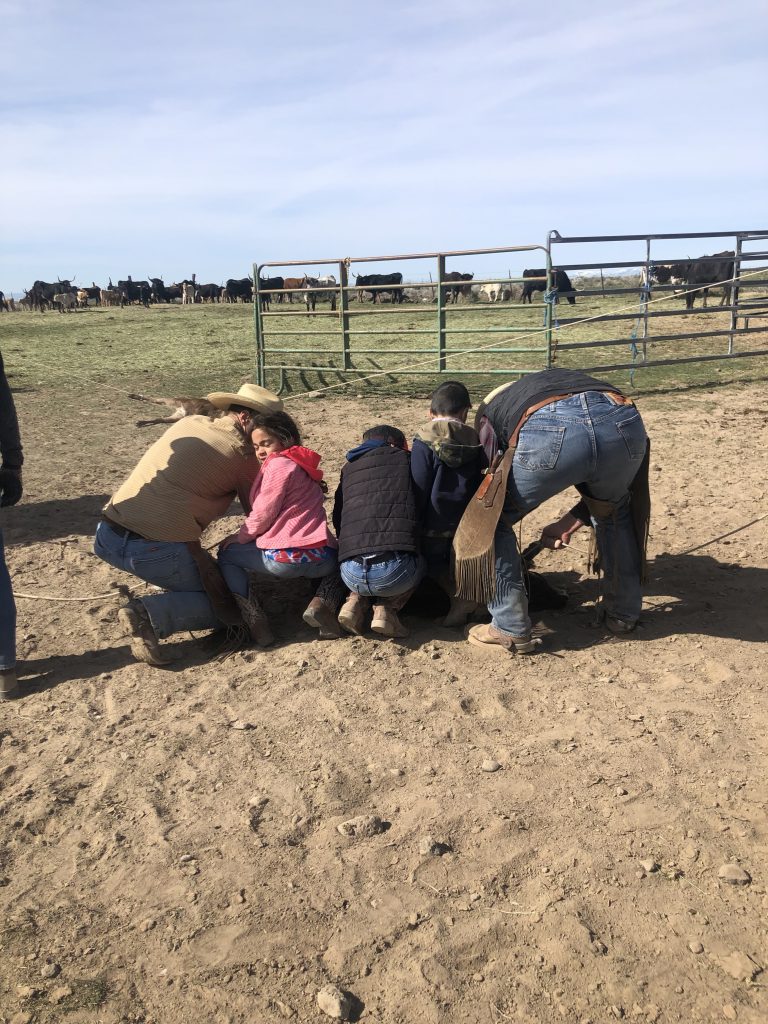 The day before the branding we went to the Bruneau Dunes and aired some young horses out. My wife mentioned that she got to ride with 5 of her 6 children that day and one grandson. Another interesting note is that all of the horses we are on but one we bred and raised, which means we trained ourselves. Soft hands and a lot of miles under their bellies; and a cow or calf in front of them or behind them on a rope always helps in their education. 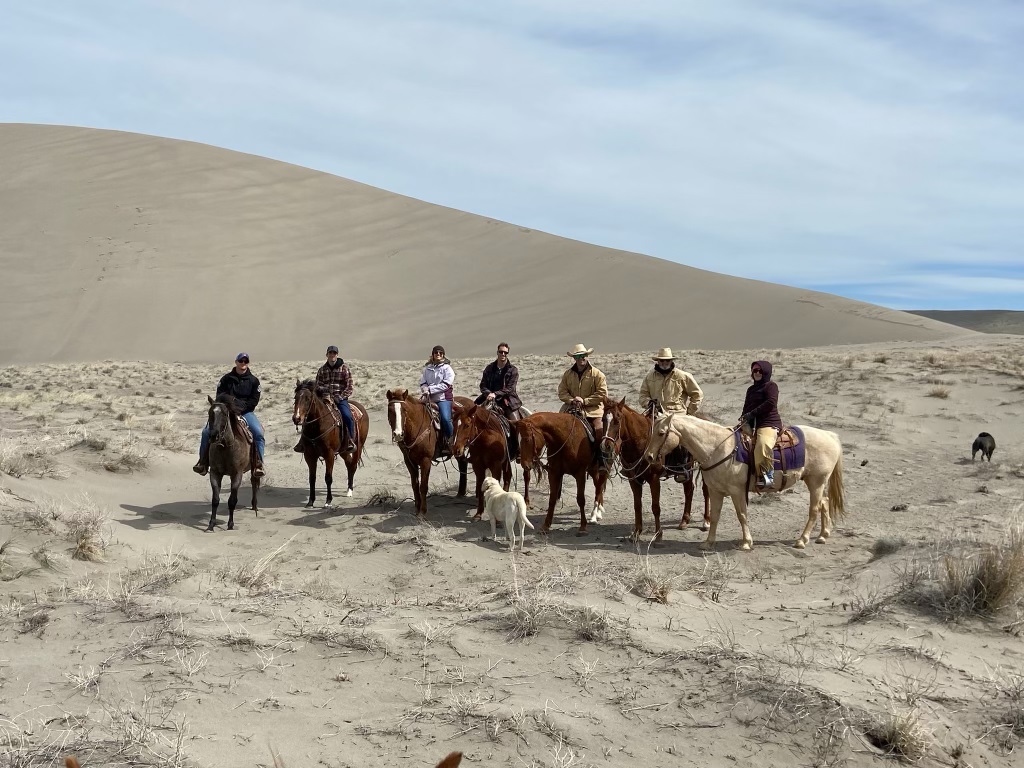 The Spaulding crew, Bruneau Dunes; our daughter Misty is not in the picture as she is taking it. She rides a horse called Superman who is a full brother to Gambler who is not in this picture. Gambler is the horse that I am roping off of with 2 of my grandsons aboard with me. I’m sure there is a picture of that somewhere in a past post. The Palomino  that my wife is riding is the only one that wasn’t born on our place but we bought him as a colt and he along with the rest have been trained by us.

The crew left to right is Kamron on Cinco, Owen, a grandson on Gunner, Jessica on Kid Colt, Owen’s mom btw, Scott on Ty, Kole on Red, yours truly on Ezzie and Joy, mom to the Wild Bunch on Rebel. Some of these colts are 3rd generation out of our mares.

If they won’t work for a living we have no use for them, horses or crew alike; otherwise they’d be no good for ‘Springtime branding in Southwest Idaho’.