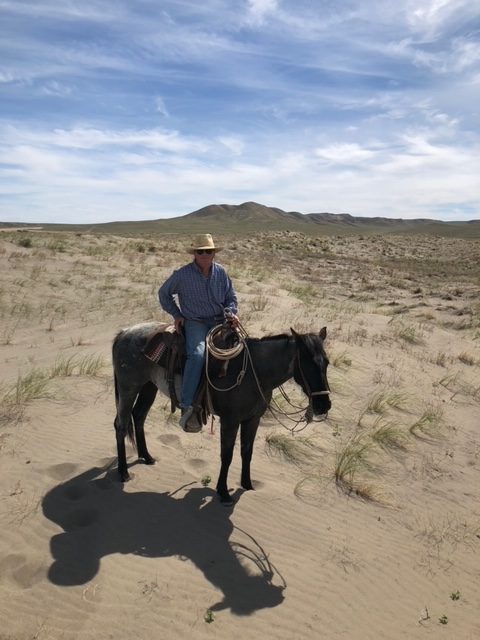 It’s not all rocks and their summer range is pretty awesome but getting there we ride our horses and push pairs over a bunch of rocks. I doubt anyone will ever prove me right or wrong but I’m sure you could pave the Concrete Jungle, Los Angeles Basin, with our rocks and have tons left over.

So why, you ask, would anyone run cows where there are so many rocks? It’s range land, at the moment no one wants it for anything else. That may change in time but not in the foreseeable future; at least that would be my bet.

Recently I spent 4 out of 7 days pushing pairs over the Rock Pile to summer range. We start around Mary’s Creek and end up in Nevada. Bull Creek, Sheep Creek and unnamed springs and seeps are a critical part of our route. Once we cross Sheep Creek we parallel it to our destination. It’s rugged country, not for the timid.

Thursday the first day started at 3 am for me catching and saddling my horse then getting to Bruneau for my ride out to our starting point. By daylight we have loaded additional horses and cowboys in with us and are now kicking them out at strategic spots to cover country and push cattle south. There are several gates to go through and creeks that can only be crossed at certain places so our herd expands and contracts like a caterpillar as we add numbers; at times we are strung out like hundreds of camels walking nose to tail single file and other times we are bunched up with a 40 head spread across the drag. Strung out is best compared to a 40 head fan on the drag; that usually only happens when we have pushed too hard or too far.

As the numbers grow one or two cowboys stay with the herd keeping it rolling while outriders drop over ridges and down through no name draws to find isolated pairs and small groups.

Our first day takes us across Bull Creek, or is it Bear Creek? To be honest with you exhaustion has faded my memory of the day.

At daylight after at least one trailer switch we are stepping across our horses with bottles of water tied inside our dusters and re-riding some of the country from the previous day. I’ve switched horses this day and am riding my Superman horse; some moments he’s more like Clark Kent than Superman but he’s a good one whichever character shows up.

We pick up a few head here and there and push on to Sheep Creek. There are six of us, all seasoned cowboys and well mounted.

The day before at noon we gathered around the chuck wagon and had a sandwich and a bottle of water. Then re-saddled our horses and headed out for another circle. Anyone that has rode that hard for a living knows that the best two things that you can do to preserve a horse is to never miss an opportunity to cool there backs down and never go down hill faster than a walk. Yes sometimes you have to head down hill at a brisk pace to head off some errant strays but save your horse for when it is absolutely necessary and not because you are in the mood to re-create the Man From Snowy River; its a great movie but his ride was for the movies and not real life cowboy work. A crippled horse or an injured cowboy in the Rock Pile is a bad idea.

Our second day ended at around 12:30, at least our riding portion for the day. From where we were it took a few hours to get home.

Saturday day three starts at 2:30 once again. I make it to Bruneau and load my horse in with Phillip’s horse, grab a few items out of my pickup and we head south down highway 51, again.

Just past the Grassmere Airport we turn east and travel down a gravel road twisting and turning east, south and west, As we pass by a two track turnoff a Ford pickup with horses in a trailer and 2 riders in the pickup fall in behind us.

Places named Tokem Bambie, the TM and other land marks that only hold meaning to a few people slip by us in the pre-dawn light. As we roll to a stop I recognize the spot where we normally catch a trailer ride home in the fall after heading out of Nevada and dropping the herd into Sheep Creek on the cows return trip north. Phillip introduces me to the two Simplot riders that will be with us today, Bill and Jillian. Jillian runs a place out there for JR and Bill, her husband works for her. Bill is a former Marine so we had a lot to visit about. Doesn’t sound like much had changed in the Corps in 40 years.

We ride west gathering pairs and small groups pushing them towards a rock chute that is a nightmare for a horse and rider let alone anyone pushing cows. We can see Sheep Creek across a small basin or more like a flat and Bill swings that direction drifting cattle our way as the other 3 of us start filtering pairs through the chute.

After a bit I fall in with the cows and continue to drift the front third through the chute; Phillip and Jillian come through with the remainder spaced out in front of them. Bill is a ways behind us but we want to keep the momentum of our bunch headed up country so we push on without him at the moment.

I recognize a rift of lava that parallels our course, we are running somewhat Southeast and as we come around the southern tip of our rift the cows turn Southwest over a small rise and filter on down through a valley. We stop driving our herd at that point as their momentum is carrying them the desired direction; to summer pasture.

The 3 of us backtrack a ways and from a small knob that serves as a good vantage point we see Bill coming with another jag of cows and calves. We fall in with him as he comes by and push his herd over the rise and let them drift south with the other pairs.

This particular day 4 riders were dropped off between Mary’s Creek and Bull Creek and made a sweep of that country heading our way with whatever strays they’ve picked up. One of the crews wife came along to drive their rig back to Bruneau as those riders are heading home with us; they have no desire to miss their ride home. After a bit we back track looking for them but to no avail so we head out to where we dropped our rigs. As we get close we see the riders horses tied to the trailers and hobbled as the cowboys are sprawled out in whatever scarce shade they can find. Somewhere in the Rock Pile we had passed by each other unnoticed.

I’ve ridden the Rock Pile with Mormons, Mennonites and Mexicans, teenagers and all ages up to early 70’s and I’ve found that race, religion and age plays no part in your ability to day work out there. It requires some inner toughness that is hard to put your finger on or into words in a descriptive way that people would understand.

You are not a Louis L’amour character, you are not a wannabe, Coca Cola, Drug Store or Rodeo Cowboy, you are a Rock Pile Cowboy. There are many places in the Great Basin that are much the same as the Rock Pile.

The third day of riding is Saturday and we are tentatively riding again the following Wednesday.

Wednesday I’m at Phillip’s in Bruneau by 4;30 loaded and head south on 51; we turn east again just south of the Grassmere airport. After hours on gravel roads and two tracks we pull up beside another pickup and trailer and within a few minutes 2 more rigs pull up. We unload and head north towards where we dropped our herd the previous Saturday.

Quite a few of our pairs are already here but our mission today is to make sure that they are all here. An hour into our ride 3 of our riders cut east up a draw as the remaining 3, myself included continue north. I’m on my Ezzie mare this day and she’s in heat so not as business like or pleasant to ride this day as she was the previous Thursday and Saturday. We get through the day just fine though as she is a seasoned campaigner.

As we approach where we had dropped our herd on Saturday Zach, one of our crew heads east up a small basin and clears it out starting cattle south. Phillip and I swing west towards Sheep Creek and check a side drainage for pairs then turn south with what we’ve gathered. In a bit Phillip peels off to the left to help Zach as some pairs are reluctant to leave shade, feed and water. Our herd grows as we push south swinging back and forth picking up stray pairs and momentum before the day gets hot.

Just short of our rigs we stop at a drift fence and sort strays. It’s not long before sorting is finished and we push the various groups of cows and calves to where they will spend the summer and fall.

Its past noon as we get to the trailer and pickup for a sandwich then load up and head home. We are going out another direction and as we pass by a herd of horses Zach rides into the herd and ropes out a colt of mine that he’s been putting some miles on. With no extra halter Phillip loans me his snaffle bit and he rigs it so it won’t get torn up on the way home.

Bill is with us this day and he and Zach had loaded his rig with some cattle needing a ride back around to the TM. We hadn’t planned on going out that way but he could use a ride for his horse. Phillip told him to toss his horse in with ours and we’d drop him off. Shane, one of our crew and cattle owner stopped us and said he could go that way home as easy as anyone so he loads Bills horse in his trailer. That’s the kind of crew I ride with on the Rock Pile, they watch out for each other, they’ll watch out for complete strangers as long as those strangers don’t cause them grief.

From where we are it takes about an hour to get to Mountain City Nevada. We pick up highway 51 and head north and just inside the Idaho border Phillip asks me if I’d drive for a ways as he is nodding off. We switch and an hour and a half later I’m pulling into his yard; it’s 5:30 so from his place alone it has been a 13 hour day.

Not much chance anyone will need me to day work on the Rock Pile between now and fall but I figure I got a few more years left in me to do it, fall and spring.

Didn’t see any of the ‘Yellowstone’ crew out there; maybe next year.