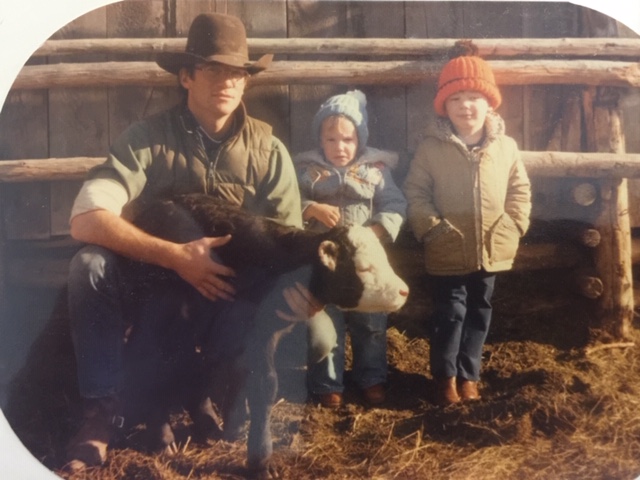 Range cows or stock cows are the ranchers most prized possession; something of an understatement but if you’ve ever ridden the range for someone or owned cow’s of your own you get the picture.

Good cow’s don’t come by accident, they’re a product of breeding, management and culling the bad ones. What makes a bad cow? One that doesn’t produce a healthy calf in good flesh ready for market at weaning time.

Most of the western state ranches that I have worked on either full time or as day help calve out late winter into  early spring and wean and sell in the fall. Fall calving can pay a dividend if you have the right weather and range as marketing weaning weight calves, 500 to 600 pounds in July or August fills a slump in supply for those weights at that time of year. The key is ,weather and range; I believe I already said that though.

Why you ask is weather and range such a key factor? In Southwest Idaho cows starting to drop calves the 20th of February will miss most of the cold weather and as the temperatures rise so does the grass for your spring range. Less feed goes in the cows and less doctoring sick calves. No matter where you calve out in the Northwest if you’re a fall calving outfit you will be doctoring calves for pneumonia. A few dead calves can rob your profits and the extra feed can be cost prohibitive at $200 for a ton hay.

Open range, as few sick calves as possible and cows that know their job.

Cows that ‘know’ their job; exactly what does that mean? I will see if I can explain it. Low maintenance  is a word that comes to mind but it does deserve a little more of an explanation doesn’t it; maybe a few stories to illustrate it will help.

Of all the places I calved cows out next to Southwest Idaho, Lowell Hildreth’s cows on the Spinner place up the Ruby river from Twin Bridges Montana was my favorite. Two years in a row, the winters of 1981 and 1982 I calved out 400 cows by myself and lost only a few calves each year. One calf was an unacceptable loss in my eyes but in reality death loss is a part of calving. Quite often there’s no one to blame but on occasion some folks are poor help. I never wanted to be ‘poor help’, not at calving or anything else I’ve ever done.

The Spinner place was about a section of hay meadows that was winter feed and calving grounds. It was covered intermittently with brush and trees so had a lot of natural protection.

At Trapper Creek Ranch, just a few miles west of the Spinner place 3 of us worked 24 hours a day for 3 months calving 400 cows and 70 head of first calf heifers. The difference was the time of year we started calving and the cows. At Trapper Creek we started the 20th of January and ran just about everything through a calving barn. It not only sucked but over the years the ranch had enabled those cows to be poor mommas. We handled them too much at the time they most wanted to be left alone and let nature do its thing. Mad cows and mad help has never been productive. Moral of the story, the more you help em the less they help their-selves.

Lowell’s cows had never been enabled, they either did their ‘job’ or they were hamburger, it wasn’t a retirement home for sorry producing cows; it was my kind of calving. Calving a month later made a huge difference. We had a small shed and a ‘hotbox’, but that was it. I think I used the ‘hotbox ‘once in 2 years.

It wasn’t that I couldn’t or wouldn’t help a cow in trouble; crap happens and that’s what a cowboy is for, but why breed trouble or enable it. I was and still am a fairly decent practical Vet; no I’m not a Veterinary but I can do a cesarean although it has been awhile. I have also pulled calves with about everything imaginable from a calf puller to a piece of twine to a piggin string. I have snuck up on cows that were down having a bit more trouble than I believed they should be having and with a tug helped them out. Sometimes I’ve snuck away and other times momma was on her feet, wild eyed wondering what predator had snuck up on her. I’ve never been much of a sprinter, although I was a fairly decent miler in the Marines but with a mad cow hot on my heels I could sprint fairly well; even in cowboy boots.

Loosli Land and Cattle out of Ashton Idaho is where I first went to work just out of college. I did a 4 month stint at Skaars Feedlot near Lewisville Idaho but went to work at Ashton October of 1976.

As an Idaho farm kid I had been exposed to a lot of things growing up working on a family farm and although we didn’t have stock cows the cows and horses were always my first love. I had a deep passion for flying but wouldn’t have a chance to develop that until after a stint in the Marines. I did grow up flying with my dad and he was a great pilot; very professional although he never held more than a private pilots rating.

I learned how to IV a cow or a horse and pull calves stuck in about every imaginable position and do a cesarean. Keeping them clean and dry, well feed and moving around a moderate amount was the key to healthy calves and good cows. The problem at Loosli’s was that we calved out in January and in a calving barn. Two feet of snow or more excluded us calving outside. We had a bull sale every year in February so the owner wanted the bulls not just pushing 2 but 2 at sale time. Ashton Idaho is an awesome summer place and prettier country doesn’t exist but it sucks as winter cattle country. Although I have to agree that they can grow more grass in a summer by accident that a lot of country grows year around.

I finally got cross-ways with the boss over using colts during the AI season and quit.

After a bit we ended up in Montana for just under 4 years. Calved out a lot of cows in Montana.

The fall of 1982 we were done in Montana and by the spring of 1983 I was flying a contract spraying bombing sites at the White Sands Missile range in New Mexico; it was one hell of a leap of faith. I was a low time pilot and horribly in over my head but was learning damn fast. As many pilots as I have seen killed along the way I’m a bit unsure why I survived.

In 1989 we moved to Mountain Home, Idaho and are still here. From the early 90’s to 2002 we ran 50 head of stock cows along with a flying business and a herd of horses. The spring and summers were busy with a crop dusting business but the fall and winters allowed me plenty of time to take care of cows and ride colts.

Southwest Idaho is a garden spot for winter range. Yes we have winters but nothing like Ashton Idaho or Southwest Montana. There are some great ranches across the Untied States but depending on what your wants are, few are better than this area for turning a profit with stock cows.

We have never owned more than the 5 acres and the home we live on but rented winter and summer range wherever we could find it. The closer the better as trucking costs can eat into your profits in a hurry.

Most winters we were on a section of ground just east of the Mountain Home Airbase. Some of it was natural range grass and some of it was farming after math such as wheat or corn stubble. There were few years that we ever feed more than 1/2 ton of hay per cow. Once the cows were paid for we made a little money.

We stuck with the 20th of February for a starting date on calving and was pretty happy with that. Most years you could get by with calving the 20th of January but one bad year could wipe out any advantage to that. The advantage was bigger calves at weaning time but it was a slim  margin and not worth the risk to me.

The 20th of February gave me plenty of time to calve, brand and get them on spring range before my flying season started; it worked out fine.

It was a great way to raise a family and although were weren’t ranching full time it kept my hand in something that I have always loved. All of our kid’s learned to ride, rope, brand, vaccinate and doctor cattle. The way we ran them was easy on us all and low maintenance.

One of the last years we had cattle the coyotes got into them and killed 3 calves. Between my efforts and the efforts of a government trapper we got 3 coyotes but it was sorry compensation for turning 3 good producing cows into cash flow. I have heard just about every argument there is from environmentalist and bleeding hearts that want to save everything but I can tell you as a cattlemen there is no compensation for a dead calf due to predators. I’m not going to go in to detail as to all the gross things that I have seen coyotes do not just to the dead but to the living as ending my post on a sour note is not my desire.

The winter of 2002 we sold our cows. We had closed out our flying business here at Mountain Home and I was looking to hit the road as a hired gun ‘pilot’ and fly for whoever had a opening across the nation. Leaving my wife and two teen age sons to take care of our cows wasn’t going to work. Both boys were very capable and my wife is a hard worker and good at just about everything she does but it wasn’t something that she needed  to do; she would have her hands full enough with me being gone and when I was home we had other things to catch up on.

Through the years I have kept my hand in as a cowboy mostly at day work but have been in the saddle from before sunup to after sundown for days in a row. To this day I can assure you that cows that calve unassisted, get up and get to rolling that calf over as she licks it dry and stands with out a fuss as the new born finds their feet  and then finds mommas milk makes a cowboys life easier and a rancher richer.