My introduction to John Lacey was through Steve and Stacy Hansen. I met Steve while riding pens for JR at Grandview Idaho; he’s a Montana cowboy and Cowboy to the core. When he’s not riding the range lands of the West he’s breaking colts, braiding rawhide or tacking iron on a horse. If it ain’t ‘cowboy’ Steve ain’t doing it; he’s a dang fine cowboy too.

I have a lot of fond memories of Steve and Stacy from riding in the feedlot, branding with the Lacey’s, flying an Aeronca Champ to Quinn River Nevada to rope yearlings with Steve off of a Gary Stowell horse I bought from Gary that needed more miles on him than I had time to put, to them stopping by and rolling their bedroll out in my office for a night, traveling somewhere between Montana and California.
Some of those memories will be better told in another post, I’ll stick with branding with the Lacey’s this time.

If memory serves me well enough it was the fall of 95 through the winter of 96 that we were riding in the feedlot together. Sometime that winter they moved on down to Independence California to work for John Lacey. Later that spring they extended an invitation to me to brand with them. I was highly honored and treated the invitation sacredly. That may come across somewhat irreverent but if you’ve branded cattle out west you know that an invitation can be hard earned and easily lost.

I borrowed my oldest sons Ford Ranger, threw my kak, ropes, bridle and saddle blankets in the back and headed out.

Spring time can be hit and miss busy for us for a flying season so I had to time it so I did not leave any customers high and dry.

Crossing Nevada from Southwest Idaho to Montgomery pass where you drop into Bishop California and then down 395 to Independence you have several different routes you can take. That first trip I went south out of Twin Falls to Ely on 93 then crossed over through Tonopah on 6 and picked up the road to Bishop. Like I said that was the first trip.

Steve introduced me to John Lacey and Mark, John’s son and they had me throw my kak on a Buckskin mare that spent the next two days making me look good. Let me put it this way, I never rode a Lacey horse that I wasn’t well mounted, I rode a couple that tried to pile me but they raise some dang good horses. In fact they are good enough to have won the AQHA best Remuda award in frequent years. Most of the horses we ride today as a family trace directly to Lacey bred horses; in fact that’s another post for another day.

Riding, roping and branding with the Lacey’s I met some great people. Eldon Tucker, Sharron Banks, Ray Allen and Ronnie Evans to name a few. Ray was Gene Allen’s brother and Gene was a crop duster in Rupert Idaho. I knew Gene and had graduated from high school with Gene’s boy Wayne. The world is rather small and well connected.

I wouldn’t meet Bill Perez until the fall of 98 at the Stone Corrals north out of Deeth Nevada located on the road to Jarbidge and Charleston.

A good bunch of John’s ropers were elderly folks, some in their 80’s but these folks could rope. Quite a bit of my roping etiquette and the way we branded our cattle as the kids built a small herd came from how John ran his brandings. There was no favoritism just because you thought you were a hot shot roper, he treated everyone equally and he watched out for everyone.

John Lacey is one of those men that make you feel better about life, yourself and the folks you share life with. He was 2 times president of the National Cattleman Association, an honor that few if any have shared. He was invited back after his first term because of his leadership skills. John was also a Marine so we had that in common and as it is put so well, once a Marine always a Marine; in fact several of his ropers had served in the Corps.

That was the only time that I roped with Steve at the Lacy’s, we roped some here around home and on the Quinn river but that was it. Should you ever have the chance to Brand with Steve and Stacy you won’t be disappointed.

We received an invitation to come back and rope with the Lacy’s for the next 11 years making it a total of 12 years that we made the haul to Independence California to rope every spring. We would brand calves up and down the 395 corridor in the Owens valley from Olanche on the south end to just north of Independence. Most of the time it was a ‘heel and drag’ to the fire and branding crew; no dead man just muggers to hold calves while they were vaccinated, castrated and branded. We may have tagged but I believe it was more of an ear mark type deal than tags.

One small bunch north of Independence we would head and heel which is my favorite way to handle calves for branding. Some folks don’t like it but depending on the size of your calves and your crew its easier on everyone; horses, calves and ground crew. Big calves drag a lot of skin off on hard ground if dragged by their hind legs. After necked and headed to the fire the heeler would pick up the heels on the way and stretch the calf tight as they came up on the branding crew. If you were better at one or the other, heading or heeling then you concentrated on what you were best at; most of the ropers were good at both.

There was always good branding etiquette with the Lacy crew. I don’t remember being cut off from a shot or jerked around with a hundred pound calf between me and another roper with the calf taking the brunt of the abuse. When roping both ends if a calf went down the header and heeler would circle around keeping the calf snugly contained between the correct rope tension and the heeler would finish dragging the calf to the fire. I’ve been to brandings that if the calf went down too soon the header continued on to the fire. It always seemed like a bad idea to me to drag a calf by his neck very far. They are tough but they aren’t indestructible. I certainly don’t want to be the roper that crushes a calves windpipe, that’s the every reason that a lot of brandings are heel them only. Trust me I get it but the idea is to handle cattle quickly and smoothly and roping both ends is fast on the cattle if done right. Unfortunately I’ve known and met a few ropers that are not welcome to rope anything that I own.

Over that 12 year period 4 of our 6 kids traveled to the Owen’s Valley and had the privilege of roping with the Lacy’s. Quite often it was a late night haul on a Thursday evening after school, brand Friday, Saturday and Sunday and then a late afternoon and evening run to get everyone home in time for school Monday morning.

The first few years we rode Lacy horses, then after a bit we hauled our own down. It was a great education for young ropers and young horses. 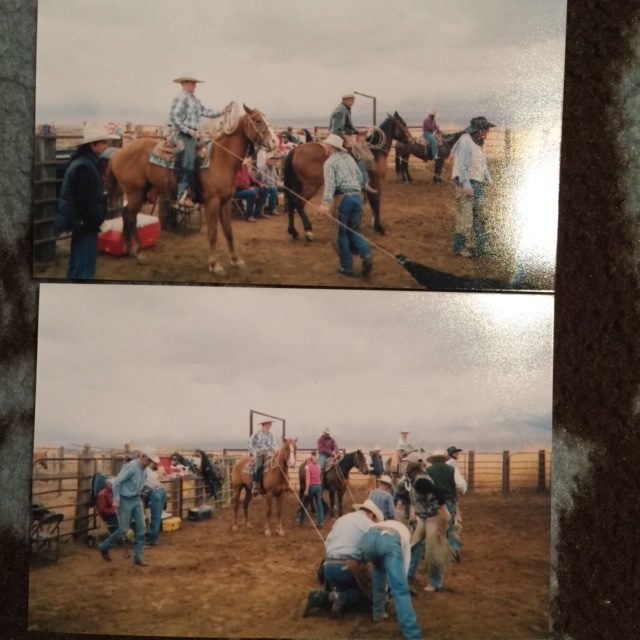 The top picture is of myself and my youngest son Kamron riding Kid Colt and me on Batman, backed up with calves stretched tight at the fire, Batman being the bay; the bottom picture is Kamron and another roper. Batman and Kid Colt were our horses but Lacy bred out of our Reminic X Colonel Freckles stud that we bought from John. Kid Colts momma was a Gun Smoke bred mare that we bought from John and Batman was out of my Three Bars X King bred mare that I bought off of a friend in Montana. Both were great horses for using but not great back yard use them every 6 months kind of horses. Horses bred to work for a living need to work or they are like rambunctious little kids with too much energy. We normally find enough work to keep them coming along as youngsters and not bored as older horses.

Both Batman and Kid Colt were 4 year olds at the time of this picture, Batman laid down and died on us the spring he turned 11, it was a dang sad day. My daughter owns Kid Colt and as a family they use the heck out of him. My grandson was branding off of him this spring.

Although its been 14 years since we last branded with the Lacey’s if John called today and told me to plan on being there this spring we’d be there. It was great times and life time memories for young ropers.

One thought on “Branding with the Lacey’s”