Owyhee county, Southwest Idaho, lies on the Northern edge of the Great Basin. It is not in the Great Basin drainage but is part of the Great Basin Cowboy Culture. Wild horses, tough Cowboys and Cowgirls, slick fork saddles, big loops and long reata’s; eighty foot of rope in a soft 5/16 is not uncommon.
Some traditionalist go with center fire Saddles but most are a variation of 3/4 riggin and Heaven forbid, a back cinch.

An invitation to join a branding crew in Owyhee County is hard earned and easily lost. Hard earned is that you have to prove your worth, you can’t do that without an introduction to the cow-boss. Easily lost can happen in a number of  ways.

My introduction came about in a rather unique way.

I left the ranching and cattle industry in December of 1982 as we pulled out of the Briggs ranch, Kidd Montana between Christmas and New years. Later that spring of 1983 I started my first flying season as a Crop Duster. In 1988 I was hired to run a Flying business in Mountain Home Idaho. I hadn’t weaned myself from my love of Ranching and riding and roping and was jumping back an forth from flying, welding, roofing and riding Colts.

One spring day in 88 as I was driving around the valley south of Bruneau Idaho, I found a cowboy on a Paint horse trotting towards me. I stopped and introduced myself and as we visited he mentioned he was heading to a branding. I told him I had done a little of that in the past and he invited me to come along.

As he introduced me to the cow boss I received an amused look from said person as I was no where near dressed to look like ‘a hand’. Dale Blanthorne was the cow boss and after a second decided that I might be at the least some comic relief; I joined the ground crew. I was dressed in  Levi 501’s, tennis shoes, a Baseball cap and Polo shirt; not exactly cowboy attire. A couple of hours later as Dale rode by he mentioned that they were branding at a trap south of Grassmere west side of the road the following Thursday; bring my saddle and rope and he’d see me then. I rode and roped with Dale for several years after that, he was a good one to be around and work with and for.

Through the years since then I have rode and roped for several outfits here in Idaho. For a 12 year period the kids and I would drive to Independence California and roped with the Lacy’s but that’s another story all together.

I’ve been to brandings that we heeled them down and drug them to the fire by their hind legs, most popular in Owyhee County is to rope both ends. A rider necks a calf and heads to the fire. At a certain point the heeler rides in and scoops up the hind legs and gently but firmly stretches the calf tight at the fire. Then the ground crew flops on the calf and changes head rope to front feet and helps the heeler shorten his hold if he so desires. Depending on the amount of room in the roping alley and herd holding area the heeler may not desire to have a shorter hold; situational awareness is important. 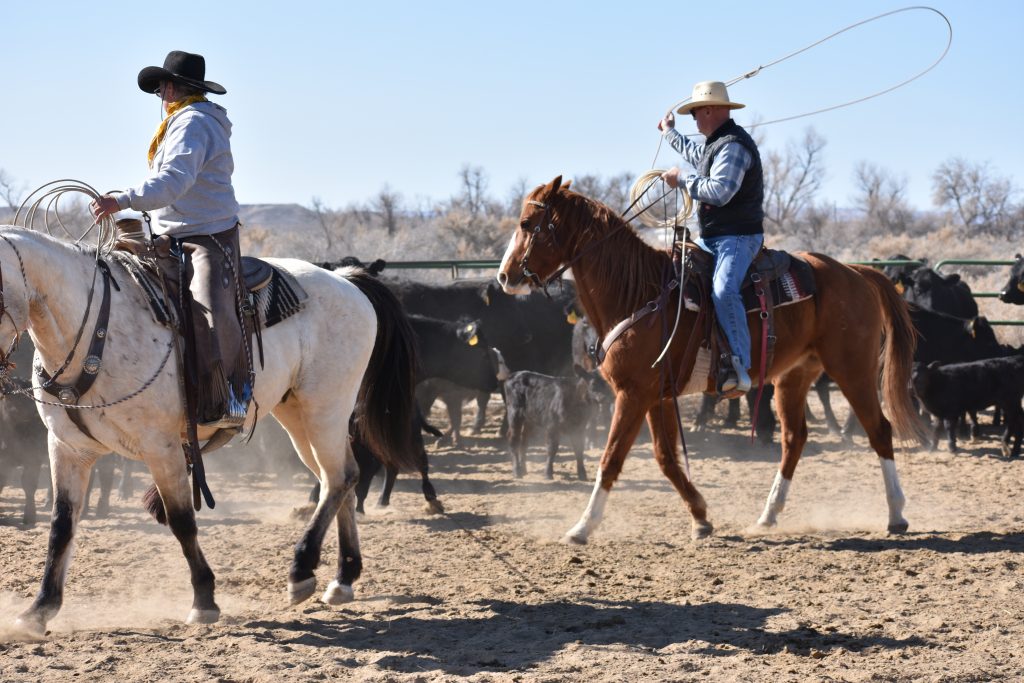 My turn at a set of heels. 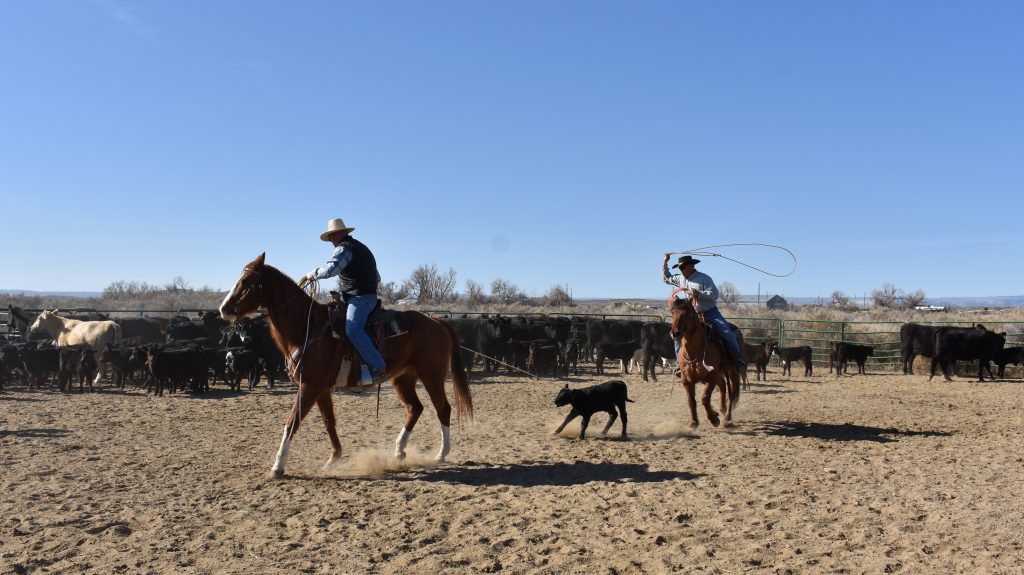 Setting up the heeler for a shot at the calves hind legs as we head to the fire.

Gambler and I with a necked calf waiting for a heeler before we head to the fire.

Situational awareness! Why Brian, forever what do you mean? What I mean is that you can get your ass in a sling in a heartbeat. Not to be melodramatic here but I know of 2 individuals that have been bucked off at a branding and killed, both to a broken neck.

Horses, ropes and healthy calves can be a wild combination. This spring at a branding my son roped a calf that took of like he’d been shot in the butt with a pellet gun, not at all unusual. The calf ran under the front of a horse and rider that was holding a calf at the fire and Scott, my son, tossed his slack and coils to the wind. The calf ran under the horses neck, dragging 50 foot of lariat and nothing came of it. Had he tried to salvage the moment and dally it could have been a huge wreck, fortunately the cowboys horse that the calf ran under was a seasoned campaigner and held his ground.

Branding etiquette is important if you want an invite for the next year. You can be too polite and not get anything done as well so there is a balance.

Cowboys are an eccentric bunch, most are vainly proud of their skills and a few are near as good as they think they are. If you are riding and roping in Owyhee County and continue to be invited back year after year then you have proven that your skill with a horse and rope, branding etiquette and personality has earned you that privilege. Dead calves won’t earn you an invite back. Stretching a calf chest high as you come to the fire or being rough in general is a huge no no. Yes things happen but some things are very controllable and handling cattle is an important part of roping.

A young cowboy friend of mine showed up at a branding with some extra help without warning and that was the end of that. I mentioned that it was not proper etiquette to do such a thing and he said he had never been to a branding where there had been enough help; he missed the point all together. I’m pretty sure that that was the last time we branded together.

Bringing Colts to a branding; you better know what you are doing. Horses don’t get seasoned and become good saddle horses by standing around but picking and choosing where and when that seasoning takes place is damn important. Bring a colt to a branding and look like you have no clue as to what you are doing is a sure fired way not to come back.

These pictures are of me and Gambler, a horse that I raised, at a friends branding this spring. Gambler is 16 hands and a tad under 1200 pounds, he’s refined, sensitive, athletic and knows his job as well as I know mine, maybe better. I’m not be the fanciest nor the youngest but I keep getting invited back. 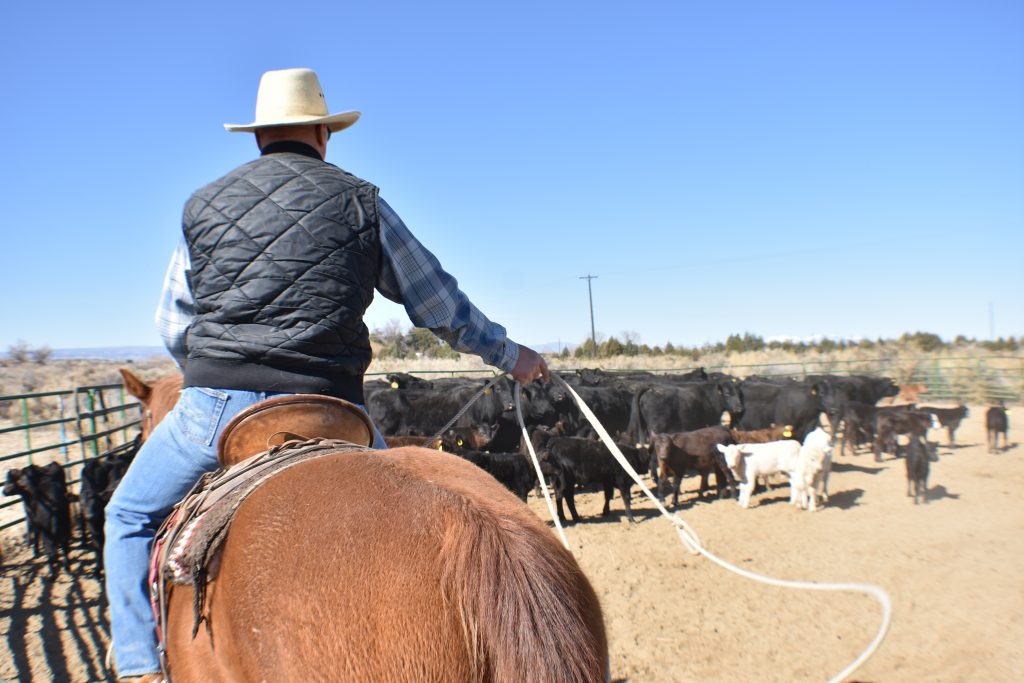 Got my eye on one. 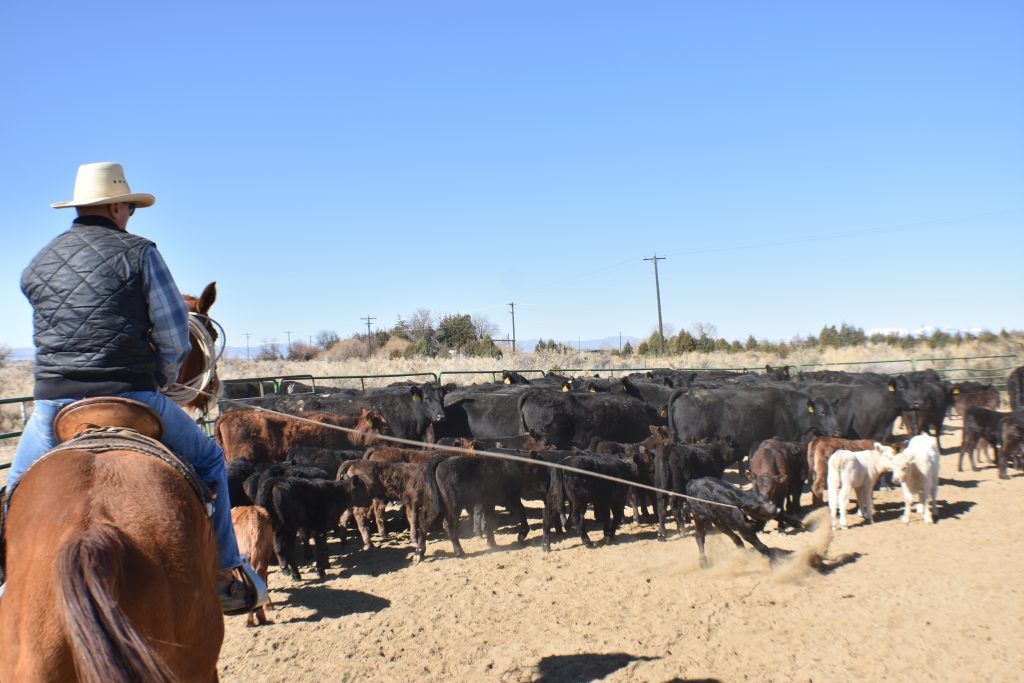 See you next year at a branding.