The old adage of ‘an ounce of prevention is worth a pound of cure’ needs to be multiplied considerably when it comes to horses. Any experienced horse owner will tell you that prevention is priceless rather than trying to cure a bad habit after it’s started. There are certain things in training cutting horses that the horse needs to figure out on his own and that requires that he is going to make mistakes but ‘Cutter’ bred horses are 75% breeding and 25% training. A good Cutter is bred to get into the mind of the cow and block the cows move as the cow makes it and not as the horse anticipates it which requires that that horse has a lot of cows in front of him to learn on.

Why is it that horses, specifically young horses are quick to learn bad habits and slow to learn good ones? It’s their nature.

My Cinco colt who is 5 now dumped me when he was younger but with the right riding I had him past that and on a good path until a year ago this past summer. As a 4 year old he bucked my son in law off and then a few weeks later he dumped my grandson.

He was flighty to start but didn’t buck at all. I had to do a little extra work to get the flightiness under control and overall he is not doing too bad. He’s been to a branding or two every year since he turned 3 and out in the desert moving cattle on the Rock Pile. He will work for a living and he’s built right as well as the right size for me. Anymore I don’t need a tall horse; just stout.

There is something about long rides that turns a horse around or brings them along in their growth and development. The country that I day work in that I affectionately call the ‘Rock Pile’ is big country and will make a young horse reconsider his errant ways.

We are in a horse trailer for 2 and a half hours before we unload and swing a leg over a horse and can be from 8 to 10 hours a horseback before we see a trailer again; quite often unloading in one location and loading up to go home miles apart from where we unloaded. Literally unloading in Nevada and loading up to go home in Idaho and not just across the boarder a few miles but 8 hours or more of pushing cows before we ride another hour to the trailer. It programs a young horses thinking to leave the foolishness at home.

Know your horse! A simple enough statement but can and is often overlooked.

A trailer ride can air a horse out enough that if he’s young and a little snorty that he’s good to go when you unload and climb on; not all of them but a good share of them. If your ride requires that you swing a leg over in the dark and it’s 7 degrees maybe an old broke horse is a good call. If it’s a 20 hour day with 10 or 11 of those hours spent a horseback in rough country and an old horse would be a bad call then make sure that  you can get on and ride off on your young horse.

I know, I just said ‘make sure’, right! There’s little or nothing that is sure in our business of riding tough horses in tough country, but tough horses are required or you may be afoot getting home.

Here a few weeks ago I blew both front shoes while out in the ‘Rock Pile’. I was riding a young horse that doesn’t have particularly good feet and he was pretty sore at the end of the day. It took me a few weeks with the right shoeing to get him over that and he’s doing fine now but losing a shoe in the middle of nowhere on him is a bad idea. He,s getting solid to get on first thing in the morning on a cold day and that I like but I’m not sure that I’m prepared to wander around out in the Rock Pile unless I have a set of easy boots to slip on him in case he loses a shoe. It’s not called the Rock Pile for no reason. And actually if I do my part in tacking iron on him he’s a good one in rough country.

The old man and his youngest son. Decades apart in age doesn’t stop us from chasing Elk together although I didn’t help him chase this one he did that on his own; I just helped pack it out. 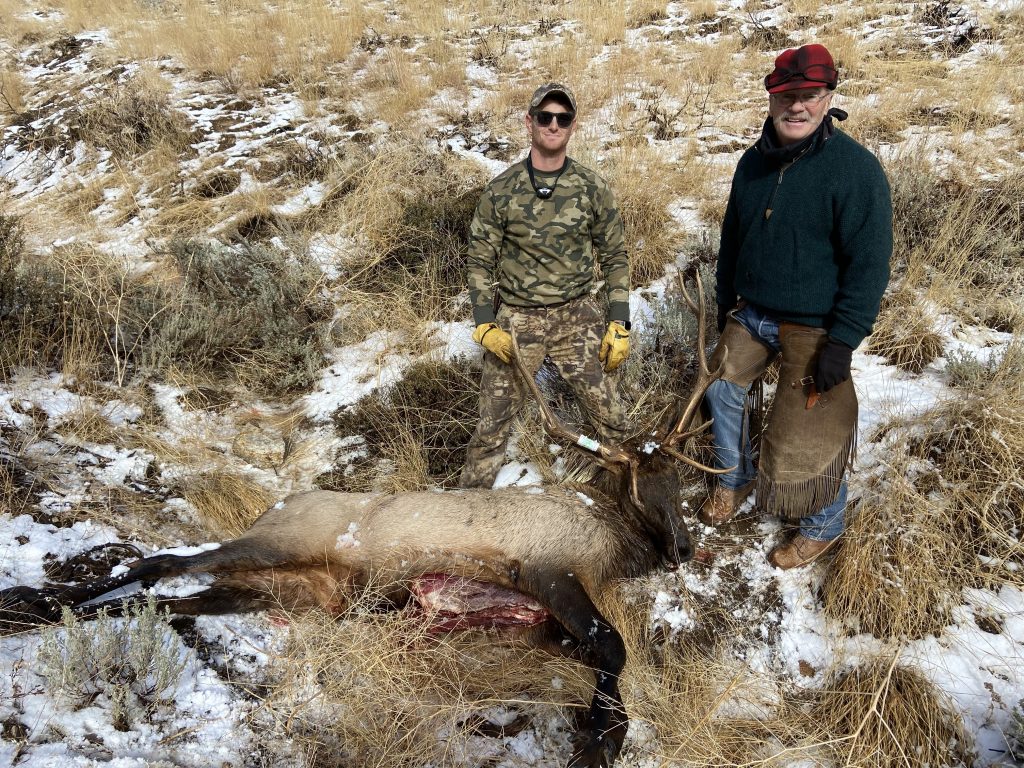 My youngest son was out here in Idaho for a week chasing Elk with one of his older brothers and they both shot Elk. They got Scott’s spike out the day they got him but Scott, Kam and I went in to pack Kam’s 5 point out with horses. We each had a mount to carry us up a long hill and then back through the country where his Elk was and 2 pack horses; all 5 head are geldings and horses we have raised.

Scott and Kam with the string and Kam’s Elk. Anderson Ranch damn on the shoreline; Cinco in the rear with a load of Elk meat.

The trip in and out was pretty routine as my son’s know their business when it comes to such things and although I am no youngster anymore I was pretty much in my element; I also know my limits. I figured I’d be good for the day but gassed out at the days end, I had a great day and wasn’t as gassed out as I anticipated. I believe that being in good company and well mounted helped.

Kam with his 5 point 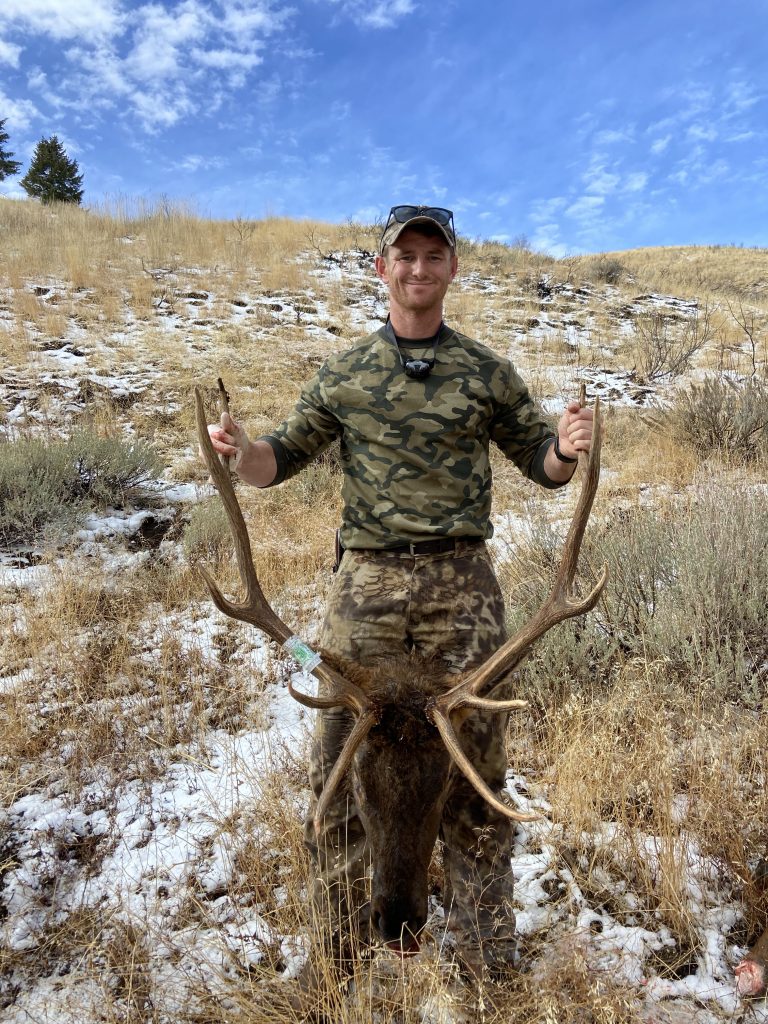 I have been using horses for hunting and cowboy work for as long as I have been able to swing a leg over one and now that legacy is being passed on to my children and grand children. It’s not a gender specific party around here as both of my daughters have helped pack Elk out; mine and theirs.

The colt that blew his shoes earlier this fall Kam rode 4 days straight chasing Elk, my Cinco colt I rode on the Rock Pile the previous Monday and then we hauled his Elk out with these 4 youngsters. Kam rode one colt and we packed Cinco, the 2 other colts are Scott’s and they are all half or 3/4 brothers; they never missed a beat, you’d have figured that they were old broke horses. Using them for a living just makes them better.

Loaded up and heading out. 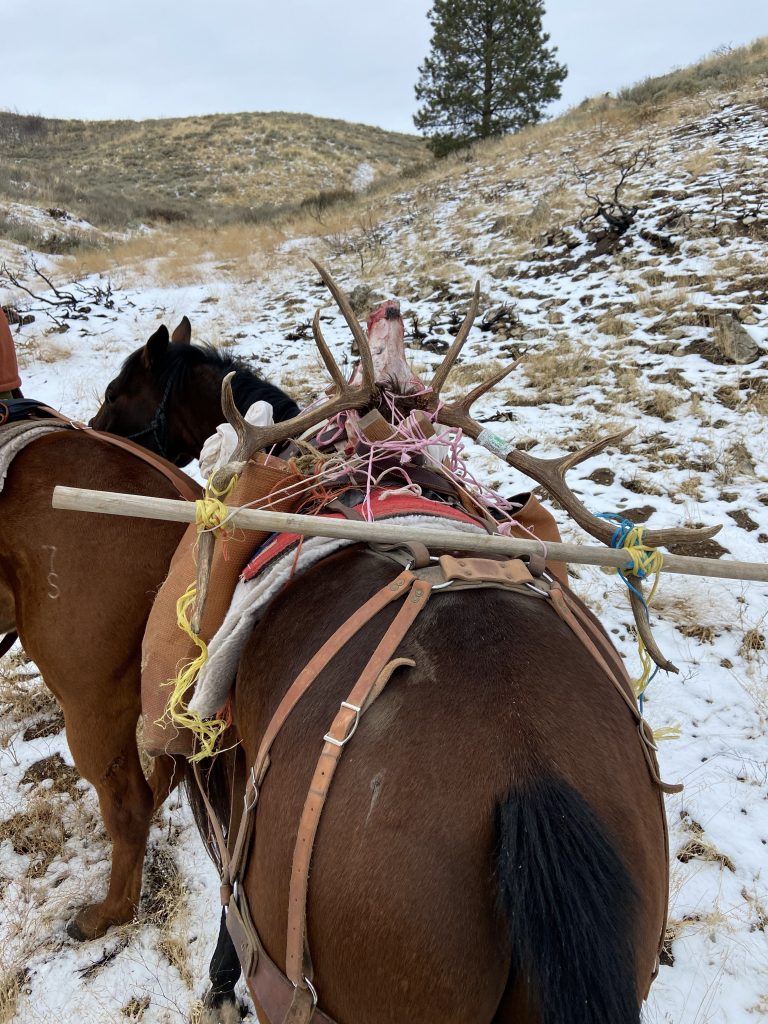 Why you ask? Because it’s in their nature.