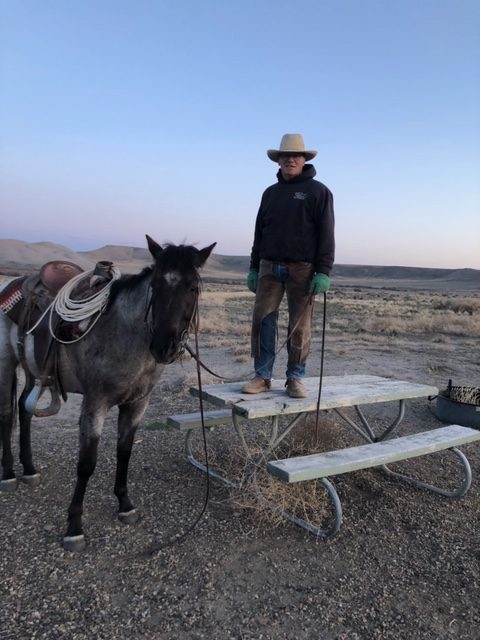 I hadn’t originally planned on doing a 3 part post on the nature of horses but it seams appropriate so here goes.

This picture is of my Cinco colt and me at the Bruneau Dunes this late winter or early spring. We have found the Dunes a great place to air a colt or an overly energetic horse out. The deep sand works wonders and the farther they go the better their minds get without a rider having to school on them all of the time. Once their minds are right then the appropriate amount of schooling can make for an awesome ride. I’ve yet  to make 2 laps around the Dunes to achieve what I want but it’s always an option. Cinco was good minded enough that day to let me get off of him onto the table.

I’ve owned a few horses in the past that had 14 rides as 4 year old that you could do a days worth of work on; if you knew how to handle a green broke horse. I found out riding in JR’s feedlot at Grandview Idaho that there are a lot of cowboys that not only can’t get a days work done on a green horse but couldn’t bring one along either. To see someone working as a cowboy and realize that they were afraid of their horses was a bit disconcerting. I mean what the hell? If you are afraid of your horses why on Earth are you trying to make a living as a working cowboy, or cowgirl. Some horses do require a healthy dose of respect and by all means never take one for granted but to actually be afraid of them is a huge mistake.

If a horse can feel a fly land on his rump or reach up and flick a fly off of his ear with the precision to get the fly and not his ear then do you suppose they can’t sense your emotions as you sit on them or even as you walk up to them. If you’re afraid of them they’ll sense it.

Sometimes that fear comes out as cruelty, something that I have no use for but at the same time I am all for well behaved horses. So how do we get a well behaved horse when we breed them to cover a 100 miles in a day looking for cows in the Great Basin or to gather, sort and brand calves for 8 to 10 hours or longer. Horses tough enough for that kind of work can be rather tough to ride. I don’t need them that tough anymore but there are still places that do.

I know someone is saying ‘a 100 miles? oh please, that’s quite the exaggeration’. Actually I’ve never ridden that far in a day, probably somewhere between 50 or 60 miles and it’s been a few years since I have done that, but I know 2 individuals personally that have ridden 80 to 100 miles in a day; tough horses and tough cowboys.

When we breed horses to be tough and have some sting to them, when it comes to working cattle, then it’s common to have enough fire in them to fight us a bit. A mind of their own so to speak, spirit, sting, however you want to label it. Too much fire, sting or spirit can be counter productive, but at the end of the day the last thing that I want to do is break a horses spirit. As a western states cowboy we often refer to ‘breaking and training our horses’, we are not referring to breaking their spirit.

Not long ago a Facebook friend of mine posted ‘in a world full of horse whisperers, be an old time bronc stomper’. I got a huge laugh out of the post but he was attacked by a couple of folks that were pretty certain that us ‘cowboys’ wouldn’t know a sensitive horse if it bit us on the rump; they are certainly welcome to their opinion.

I’ve ridden some great horses but they had to know that someone was in the drivers seat so to speak. You can’t both be the boss, when you are on the horse they have to bend their will to yours. Their are a few times when they can be the boss, cutting or sorting cattle is one of those times. A good cutting horse has to get in the mind of a cow and you as the rider cannot think fast enough to cue the horse. Those great cutters are a product of 75% breeding and 25% training. Once again those well bred horses can have plenty of fire.

Most great basin cow ponies are at their best if they can do it all; that can be hard to come by.

A horse tough enough to make an outside circle say trotting 60 to 80 miles is not always the best for sorting and branding. Your best horse for sorting and branding may not be the best one for an outside circle. This is not a new problem, several of my books on old time cowboys, those born in he mid to late 1800’s talk about their horses that were good for pounding rocks, covering ground or having a ‘lot of bottom’  verses their horse that were good for sorting and branding. It didn’t always come with size or a certain look either. Ed Lemmon said the toughest rope horse he ever had was hardly 800 pounds but would pull the horns off a steer half again his size. Not a direct quote but you get the idea.

June 20th we had a play day at the Bruneau Dunes as a family with our horses. We didn’t take everything that we owned but 5 head of broke horses and 2 colts. The colts were 4 and 3; it was a good call. We had a couple of riders that hadn’t been on a horse in a decade or more and grand kids ranging in age from 3 to 16; we did not need a trailer full of colts. The 2 colts we had reminded us that they were colts and still learning. Even our older broke horses we warmed up to see if their minds were right before we started putting riders on them; we had a great day.

Everyone that wanted to ride a horse was able to and all of the horses got rode more than once by more than one rider. Gambler, a 14 year old gelding that we raised carried an adult and 2 young riders more than once and also a rider that hadn’t been on a horse in over 20 years. No one got unloaded and as near as we could tell everyone had a great time. The horses made several passes down the same trail but often came back a different route and it was good for them. As a good friend of mine said earlier this spring as I was helping him sort cattle and I was using Cinco;’the monotony of the day will be good for them’, how true.

Repetition, calm and deliberate is good for them, the horses that is, why you ask, because ‘its good for their nature’.