When I was a few weeks short of my seventeenth Birthday I got hung up on a yearling colt and nearly drug to death. I wasn’t riding him I was just connected to him and wasn’t coming loose. It would have been a bad day for my parents as they were off fishing with some friends and my brother, Bruce and I were home alone tending the farm. Berry and Bobby my younger siblings were somewhere else so it was just the 2 of us brothers. My life didn’t end that day but I learned a valuable lesson about ‘flighty’ horses. 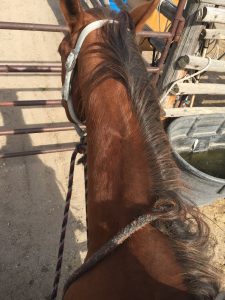 The horse in question that day turned out to be a ‘good one’ but it took a lot  of miles and wet saddle blankets to get it done. Through the years I’ve been very adamant about horses standing to mount or dismount. Flight being a horses basic instinct some of them have required a little more attention than others to instill in them that ‘stand still’ means exactly that. None of this ‘Roy Rogers or pony express stuff’. Trust me I loved Roy Rogers as a kid and we had plenty of horses that we did the ‘pony express’ run, jump and get on while the horse was running but it is suppose to be on cue from the rider and not the horses idea.

The first photo is an overhead shot from the left side of my horse as I stand on my mounting block. This next photo is quartering from the left; fairly self explanatory. 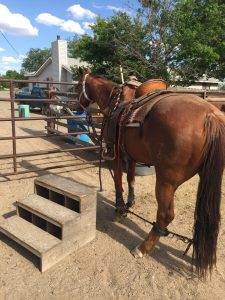 This  is my Esmeralda mare; I usually spell her name with a Z but my computer wants to use and S; so be it then. Either way as magnificent as this mare can be she can also be a witch. I don’t remember her being exceptionally flighty as a colt but I loaned her to a friend to put some ‘cowboy’ miles on her and when I got her back the first thing that I noticed is that she would ‘bolt’ whenever I would take her halter off.  Not acceptable behavior by my standards. I don’t cross hobble everything that I break and train as I usually ‘don’t fix what ain’t broke’ but it is a good tool to use. 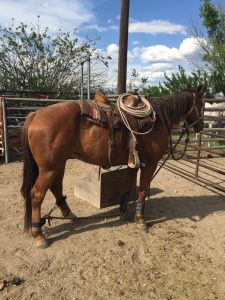 I posted some of these photo’s on Facebook but I’ll be able to go into more detail on my blog explaining what I’m trying to accomplish.

When we start our colts we step on them from both sides, which side first is not important but we want them comfortable with either side. Tradition teaches certain things and there is usually a reason why we do, what we do.

A swordsman’s weapon is on his left hip so mounting from the left is necessary to keep his weapon out of the way. Just as in time gone by a gentleman would escort a lady on his left arm so that his right hand and arm, his  sword hand and arm would be free to draw his weapon to defend her honor or protect them from being robbed or just to pick a good fight. I like tradition and and I am a huge fan of history. I haven’t had to draw my sword lately in defense of anyone’s honor but in today’s horse training we strive to make our horse ambidextrous. Get on from either side, be able to rope with either hand or just about anything else you may ask a horse to do. Pass grand-kids back and forth, you know the usual family stuff. 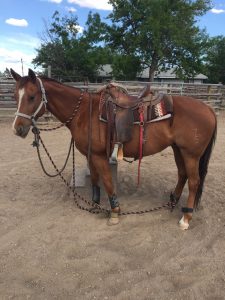 This series of photo’s shows Ez cross hobble and my mounting block in various positions around her. My mounting block is ‘Satan’ in her eyes or at least its rather ‘demonic’. Most of our horses I’ve been able to train them without much effort to side pass up to a table, horse trailer or fence to climb on or off. She’s too sensitive for such shenanigans. She’s the mare that if a 5 gallon bucket is on the left of the fence one day and you move it 6 inches and she’ll eye it like it’s very evil. At least for the first time she passes it by. She’s an awesome horse in so many ways, she’s just not the indifferent easy going type. Got a job to do? Saddle her up; you’ll be well mounted and never be sorry. If the day is a long one you will be happy to be on her because you’ll have a lot of horse left at the end of the day. Or at least enough horse to get you home.

View from the right side, mounting block on her right. 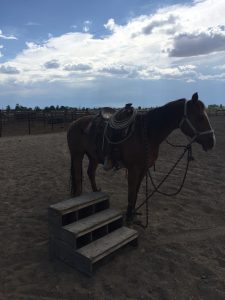 Earlier this spring I had a great ride on her on a Friday and saddled her the next day to work some cows at home and she was wild and unpredictable. What changed is anyone’s guess. She is a mare so it could have been springtime heat cycle but she has proven to be a little wild an unpredictable as well. Whatever it was it didn’t matter she had to get over it. It was a day that I couldn’t head out across the desert and ‘air’ her out so I cross hobbled her and played ‘musical chairs’ with her for a couple of hours while I worked on some other chores. Before the day was over she was pretty accepting  of me climbing over her from either side. Using my ‘Satanic., mounting block, at least from her point of view, I would climb on her from one side and off the other side. She floundered around a bit trying to escape ‘Satan’ but settled down eventually and relaxed. There wasn’t anyone around to take pictures so you’ll have to take my word for it that I actually climbed all over her.

It hasn’t been broke since. 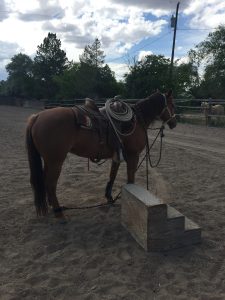 I could tell you a lot of stories about ‘loper chicks’ getting hung up trying to dismount and spinning around the horse several times before they were launched or people being brained after getting hung up trying to get on as the crowd rode off and their horse bolted but I’m not sure that would end my post the way I would like. If you have ever seen someone killed by a horse you won’t soon, if ever, forget it.

If imitation is the sincerest form of flattery it is also one of the best ways to get hurt with a horse. Watching some one do something with horses  is not the same as understanding it. If anything I post helps, or makes sense then I am glad, but if you are not sure what I’m talking about, have a competent horseman help you.