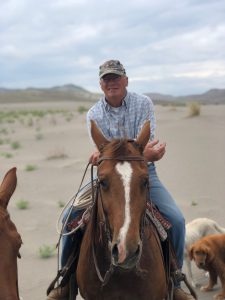 It has came to our attention that there are fake profiles on Facebook, This evening we are here to interview Idaho author Brian Spaulding in an attempt to assure people on Facebook that there are real people out there doing ordinary things in life and who do not have the time or energy to post fake or phony things.

“Good evening mister Spaulding and thank you for being with us tonight”.

“Thanks for having me”.

“Mister Spaulding tell us about yourself, where you’re from, how you were raised and your experiences in life”.

“Call me Brian if you will, if you continue to call me ‘mister’ I’ll keep looking around to see if my dad is sitting here with us”.

“Fair enough; where were you born”?

“Eastern Idaho; Rigby to be exact”.

“Where did you grow up and where do you call home”?

“That may require more time than this interview will allow”.

Slight chuckle on the part of the interviewer; “We have all the time in the world so if you want, take it from here and I will only ask a few questions as we go along”.

“Mom and dad were farming an 80 acre chunk of ground on the east side of Heise Hot Springs just out of Ririe Idaho. The Rattlesnakes were so bad that dad didn’t dare sit down at night when he was watering for fear of sitting on one”.

“The place didn’t have indoor plumbing so mom was busy hauling water to keep 3 little boys clean and cook and wash with. The outhouse was out the back door a few feet. Getting there in the dark was a challenge during snake season. No one ever got bit that I know of”.

“We moved to a farm west of Blackfoot Idaho when I was 3 and farmed there until I turned 6 then we moved to a farm north of Rupert Idaho and that’s where I started school and graduated from Minidoka County High, better known as Minico. The school was nick-named ‘Marijuana High’. It was the late sixties”.

“What did you do after graduation”?

“Went to college for a year then joined the Marine Corps”.

“What on Earth possessed you to join the Marines? That was Vietnam era; didn’t you realize that going to Vietnam wasn’t a question but a reality”?

“I joined knowing full well that I would go to Vietnam and although I’m not the first to throw a punch I’ve never been afraid of a good fight; still ain’t even though I’m too old for that kinda stuff anymore”.

“There are no guarantees in life but the odds are pretty good that I’ll make it; at least that far”.

“I’m not sure what to think of your sense of humor”.

“Most people aren’t and it is rather caustic and irreverent at times. It’s got me in trouble as much as it’s kept me out of trouble. I never use it to insult anyone; usually if I’m in an insulting mood there’s no question to my tone of voice. That doesn’t happen very often. We’re getting off track here”.

“Yes we are. Did you make it to Vietnam”?

“No; I had orders twice but never got past Okinawa. I was a grunt, 0311 MOS in the First Marine Division. I had no illusions as to where they were going to send me”.

“President Nixon had promised to pull us out of Vietnam and by the spring of 1972 most of our fighting forces were out of there. I had until August of that year to finish a 3 year hitch and was stationed at Camp Hansen in Okinawa. I’ve yet to meet anyone that wanted to be the last man killed in Vietnam”.

“You have an interesting way of saying things. What did you do after that”?

“Married a beautiful little 18 year old gal from Eastern Idaho, got a college degree, raised a passel of kids, managed ranches across the Western United Sates, flew my ass off Crop dusting, Firefighting and flying the back country of Idaho and Montana. Had a ball in general and still having a ball?

“Did you leave anything out or would you care to expound on any of that”?

“You’re the one asking the questions; what else do you want to know”?

“We ‘may not’ have enough time for all of this after all but tell us briefly why you started writing and what your passions in life are”.

“God, country and family; aviation and horses; that’s pretty much the long and short of it”.

“How long have you had an interest in horses”?

“Do you raise them, train and show them or are they just for fun”?

“All of the above. I’ve used them for my living and we did raise, train, show and sell a few. Mostly now we trail ride and I hit as many brandings as I can fit in each spring”.

“Where did you learn about horses”?

“Most people today go to some sort of horse clinic, quite a few of them are put on by Ray Hunt or Tom Dorrance protégé’s, have you ever gone to one”?

“No; I went to a few Reined Cow Horse clinics when I was showing but quit attending them a few years ago”.

“I couldn’t find what I was looking for and came back to what I had always known to be true concerning horses”.

“The answer is between you and the horse. Some people can help you figure things out but a lot of the clinicians are so arrogant it’s hard to get past that”.

“Do you help anyone with their horses today”?

“No; I found out a long time ago that I could deal with the horse but not with people”.

“Tell us about your flying; it sounds like you flew professionally, did you”?

“Yes I did. I grew up flying with my dad and his story is a book in its self but I developed a deep love for flying in my youth and after my discharge I was determined to get my pilots license. When we were in school at Logan the flying club was short of members so even though I wasn’t an aviation major I petitioned and they let me join. The club had a Cessna that we flew incredibly cheap and the monthly dues were affordable. After graduating with a degree in Animal Husbandry I managed ranches for several years. I kept working on my flying ratings and finished my Instrument and Commercial ratings”.

“In 1983 we left the ranching industry and I started flying for a living; Crop Dusting at first then later flying the Single Engine Air Tankers fighting fire. I flew the back country of Idaho and Montana mostly for fun. I had a great time flying and when I was fighting fire I might be dropping retardant on ‘gators’ in Florida one day and a week later be dropping retardant in the Hells Canyon of Idaho”.

“Are you still flying”?

“What for, did you kill someone”?

“No, for medical reasons”.

“You look healthy enough; what’s up”?

“Ok; we can respect that. How many hours did you log”?

“Wow, and they grounded you? Did you ever wreck one”?

“No; tore a few up but was always able to fly the biggest piece back”.

Shocked look on interviewers face.”You’ll have to explain that one”.

“Ok; what started you writing and when did you start”.

“Your fight with the FAA, explain that would you”?

“Losing my livelihood wasn’t something I was going to take without a fight so we, my wife and I, started an 18 month battle with the FAA. After spending way too much money we had to throw the towel in. The Federal government has more money and lawyers than I do”.

“Tell us about your books”.

“I started writing for therapy during my fight with the FAA. I was driving truck trying to pay my bills and was spending the weekend in a truck stop in Los Banos California and realized after 2 or 3 random chapters that I actually had a pretty decent story going if I would pay attention. I enlisted the help of my oldest daughter and one of my sons because my grammar and spelling are horrible and went to work”. “The first book was published electronically the fall of 2012 and now both books are available e-book and paperback on Amazon

“Both books, you have more than one”?

“Yes “El Diablo con Pistola’ is the first one and the second is ‘The Warrior Within’. They’re sequels”.

“Do you have any more coming out soon”?

“I’m not sure how soon but yes I do have over 2 dozen projects outlined”.

“Well mister Spaulding or rather Brian thank you so much for your time”.

“If you were to describe yourself and not able to send a picture what would you say”?

“Sixty something, bald, bow legged and busted up; caustic and irreverent sense of humor”.

Slight laugh on the part of the interviewer; “yes I believe that would do. Thanks again, and a special thanks to all those who have tuned in for this interview.  In the words of an old horseman that has passed on to greener pastures ‘may you always ride a good one, with the wind in your face and the sun on your back’”.

“Good night folks and thanks again”.